Between ± 1903 and 1915 the Russian photographer Sergey Mikhailovich Prokudin-Gorskii used the photographic process of colour separation to document the Russian Empire. The colour separation process is traditionally based on three black and white photos: one made with a red filter, one with a green filter, and one with a blue filter. By superimposing the resulting black and white photos, fitted with the same colour filters, on top of each other a full colour image is additively generated.

Prokudin-Gorskii exposed the three photos one after another, with a short interval between exposures to change negatives and filters. Anything that moved in between exposures would – unintentionally – reveal deviating colours or turn into colourful phantom images in the later composite image. When people due to a movement transform into coloured transparent phantoms I experience these as an allegory for mortality.

The deviating colours which initially inspired me to start using colour separation can be seen in the portrait of Pinkus Karlinskīĭ from 1909. The lock keeper stood perfectly still while the three photos were taken. Subsequently his face and clothing appear in normal colours, but due to the flow of the water surreal hallucinating colours appear in the river. From this de/re/construction of time a fascinating imagine emerges. 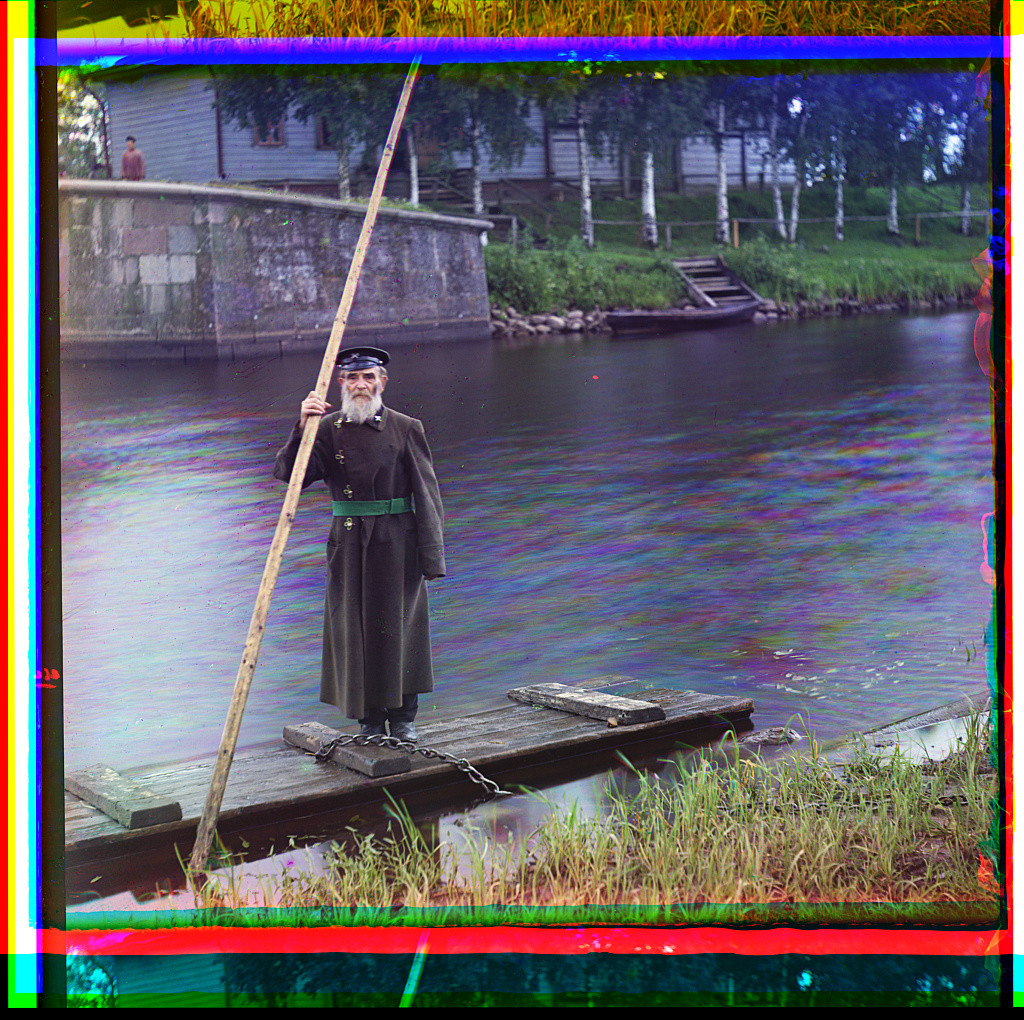 Prokudin-Gorskii: Monument dedicated to the opening of the Onezhskii Canal 1909

On the one hand Prokudin-Gorskii’s photos portray people, cities, villages and landscapes frozen in time. Simultaneously the colour deviations documents the time that has passed between exposures. In most of his photos the passing of the time, due to changes of light or movements, is so emphatically present that I experience his photos as short film. Extreme short films which consist of just one frame and which are of indefinite duration. Because of this I felt the desire to see a colour separated image in motion and I started to covert the historical analogue process to digital video for creating the video Three Dimensions of Time (video at the bottom of the page).

In the video three moments in time are captured in three layers of coloured imagery shown simultaneously. Combined, the layers form normal full colour images of the elements which persist through time. Simultaneously transitory elements – animals, people, machines – move through these scenes in single colours, leaving only a brief trace, as if they’re memories or ghosts who have left behind their past, present or future.

In line with Prokudin-Gorski’s portrait of Russia, I started capturing a variety of landscapes, architectural styles and portraits in Russia based on color separation in video and photography. Together these works form the project (un)moved. Where Prokudin-Gorsky’s colour deviations and phantom images were technical imperfections, I consciously choose a variable interval between exposures to create the desired images.

The photos by Prokudin-Gorskii are part of the collections of the Library of Congress:

Above: a small selection of photos from this series

Below: (UN)MOVED at the Hermitage Amsterdam, 2020

Three moments in time are captured in three layers of coloured imagery shown simultaneously. Combined, the layers form normal full-colour images of the elements which persist through time. Simultaneously transitory elements – animals, people, machines – move through these scenes in single colours, leaving only a brief trace, as if they’re memories or ghosts who have left behind their past, present or future. Some people have lived for so long that they become as stable as their surroundings. With dignity they become stereotypes of themselves, representatives of traditions which are as much a part of the landscape as the buildings.